Every new technology development comes with it’s own set of challenges.  (a great example is the ever changing social media rules, such as the new facebook algorithm that has caused some of our friends to simply disappear from the “feed” and thus now…our online lives).

Fast food is great because it’s cheap, super tasty, and you don’t have to get out of your car.  But, you will spend time making up for it in hospitals for the damage you do to your body.

Streaming services are great coming through your tiny little Echo speaker until someone puts a CD on and plays it through an actual stereo system that has weight, volume and low end, and then you remember how better it was and not is.
(If you tune in to the “Evan Goodrow” channel on Spotify it will automatically insert “Imagine Dragons” a massive big music biz band that of course sounds nothing like me -great development but you have to remember to turn it off).

(Below, onstage at the PanMass Challenge 2016)

Then, there is the “concrete.”  The real things.  The real times, conversations, and people that are always more important than the tech developments.

I’ll play the Pan Mass Challenge tomorrow (August 4th) and it will be the sixth year I’ve been asked to do it and I’ll do it as long as they ask.  Why?

Because no matter how much tech goes into a bicycle, it still doesn’t ride itself, it takes a human to do that.  With riders from 43 states, 10 countries, raising 52 million for cancer there’s no challenge in understanding that tech can’t and won’t make it better.

This photo was taken in 2008 at a Sail Newport fundraiser (thanks Matthew Cohen Photography).  This September I’ll be returning to the Newport stage to help them again.   More info Here.

One of the more exciting aspects of doing all the different things that I do (travel included) is that I get to meet a lot of people.

And almost all them I meet love the arts and music, and not surprisingly, love to help others.  So you might imagine I spend time doing the same.

The Pan-Mass challenge is one of the biggest fundraisers on the planet (6000 cyclists raising just under 600 million for cancer research to date) and I’m happy to help out this August 4th.  You may not be “into” this tribe unless you’re a cyclist but maybe you know a little about it now.

Note -this photograph is not of the bicycle tribe but one of the guitar tribe from the blues guitar summit masterclass I taught a few years back.  Miss those guys! 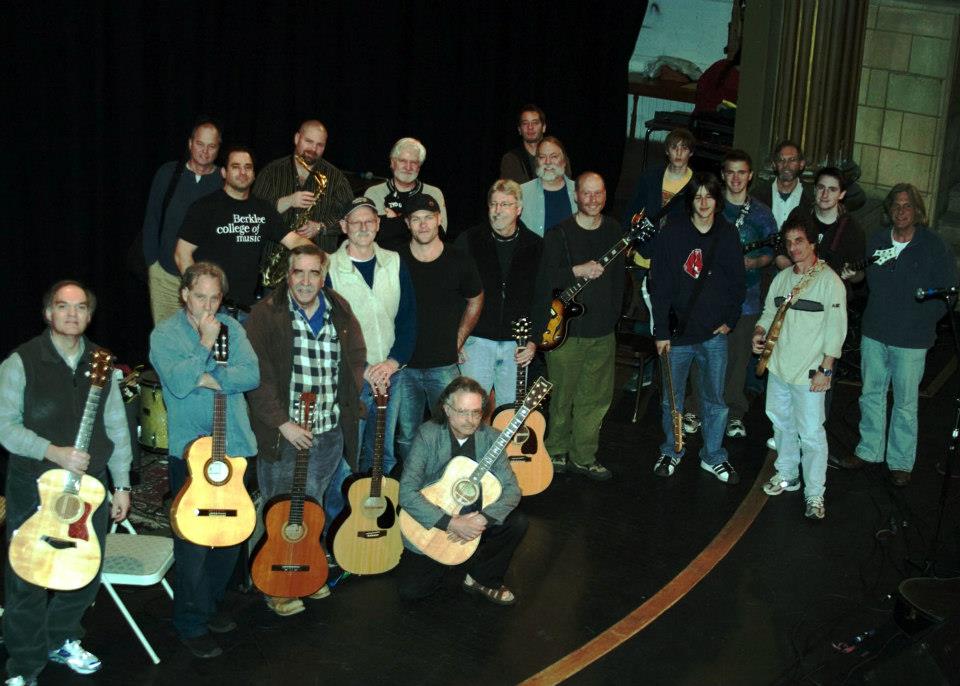 Wednesday giveaway from “Burn” … Go get it Here

Spotify Summer Party Mix
Acoustic Pressings
Anyone up for Yoga?

“Just ’cause you like Jim Hendrix doesn’t mean you should try and play like him.  Probably ’cause you can’t.”  -Anthony Bourdain (speaking in praise about Ferran Adria

I got asked to be a part of a Hendrix tribute show once (with 3 other guitar players).  I was also asked to do a Prince tribute show just after he died.  And….no.

They’re all money grabs.  Tribute acts, pure cover bands, impersonators, hell, maybe even clowns (is there such a thing as an original clown?).

I’ve got no issues with money grabs, it’s just not the original game when it sometimes gets confused for one.  I love listening to Jimi but I don’t want to play his stuff like a classical Bach rendition.  I’d rather write something and sing it from my heart.   When “Hey Joe” was requested for the Pledgemusic campaign I sighed but kept it up, if we’ll do it, let’s do it our way.  That might make a good motto someday.

I don’t wonder why American art (music and movies) has been one of our biggest exports in the last 70 years.  Originally, it was all original.  And, that’s kind of American.

I don’t like wearing sunglasses when I sing.  In fact, unless you’re blind I don’t want to listen to you sing with sunglasses on because it makes me feel like you’re hiding or something (if you’re Marvin Gaye or Bono I guess you’ve earned it so it’s ok).  I’ve got to see the eyes.

That being said, it’s cool when your bass player wears them.

I have to wear them on Thursday because the Sakonnet Vineyard is bright and I have blue eyes and I simply can’t see without them.

Here’s a gift track for you for July 4th….Enjoy!