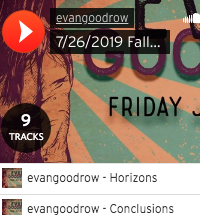 We muddle our way through.  We pick it up and try to recreate what resonates with us.  We think, I like this, I don’t like that, and how do I get there from here?  And then if really fall in love we start to ignore that gap between where we are and where we want to be and we only start dreaming about tomorrow.

It’s important to remember the beginning.  We all started out playing someone else’s songs.

Oftentimes when working out new material, it “appears” in the middle of a night, unannounced in a live set, as the group is always smoothing the songs out, ahead of the recording.  I’ve had the opposite experience with “FuturePlaneta” (simply because there’s been no live shows).

No demoing for a live audience.  No taking it for a test spin.  I’ve even abstained from playing the new cuts on my facebook live feeds until it’s released.

The songs will always sound different from when they’re written, handed out to the players, recorded and ultimately finished.  And then they will change as time goes on.

Here’s 3 versions of “Let’s Burn Everything.”  The “Renegades and Healers” version being the original take that was recorded years after the one on “Burn.”

And the live one has a hammond organ on it.