I began writing by emulating my own interests like any writer does.  We borrow voices until we find our own, if we’re looking for our own.  And I had big ambitions.

I wrote lyrics like “True love is as deep as the ocean” and “you give your dreams a chance, a chance to be free.”  Tall stuff.

Then I was told maybe I should turn it down a little, bring it back to earth a little.  Maybe play with humor.

And so it became, “it’s ok for girls to dance with girls.”

And sexual ridiculousness with lyrics like “I want to hunt you like an animal, show you my 20,000 years of evolution.”

If I was wearing the hat and inspiring people to dance I might as well have some with the persona and dance with things instead of being so serious.

But I am serious and maybe that’s the problem.

I’ve taken way too many defeats too seriously and too personally for my own good and I’ve always had a kind of worry about whether or not I would make peoples lives better with my music, because for me, that’s the purpose of it.  “Can’t you see the way I want things to be, I want to set the whole world free.”  Again, tall stuff.

Like all phenomenons, there’s a balance in-between somewhere to be found and nurtured.

I can’t listen to “word salad” lyrics (most jam bands fall in that category) and the power pop message of “you left me, you hurt me, come back” and every variation of it has been exhausted to the point I don’t even hear it anymore.

And as the culture changes the meanings of the words do and I find it harder to communicate humor these days and I wonder if it’s because there’s less of it.

If our words get replaced by moving images and we lose double meanings, suggestions, and metaphors along with nuance and play, I don’t like to think where that will leave us.

Making the face with the bass in hand. 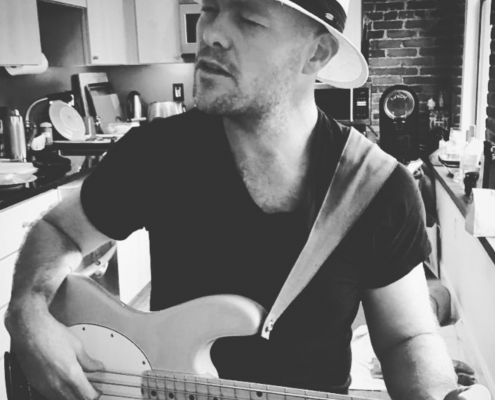 “Singers and Musicians are some of the most driven, courageous people on the face of the earth. They deal with more day-to-day rejection in one year than most people do in a lifetime.
Every day, they face the financial challenge of living a freelance lifestyle, the disrespect of people who think they should get real jobs, and their own fear that they’ll never work again.
Every day, they have to ignore the possibility that the vision they have dedicated their lives to a pipe dream.
With every note, they stretch themselves, emotionally and physically, risking criticism and judgment.
With every passing year, many of them watch as the other people their age achieve the predictable milestones of normal life – the car, the family, the house, the nest egg.
Why?
Because musicians and singers are willing to give their entire lives to a moment – to that melody, that lyric, that chord, or that interpretation that will stir the audience’s soul.
Singers and Musicians are beings who have tasted life’s nectar in that crystal moment when they poured out their creative spirit and touched another’s heart.
In that instant, they were as close to magic, God, and perfection as anyone could ever be. And in their own hearts, they know that to dedicate oneself to that moment is worth a thousand lifetimes.” – David Ackert, Backstage West 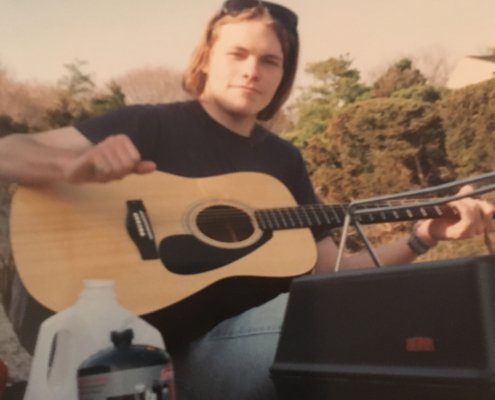 Because I started on one and it led me here.  Brutal and unforgiving in it’s heavy strings and squawks and squeaks, the acoustic forged me.